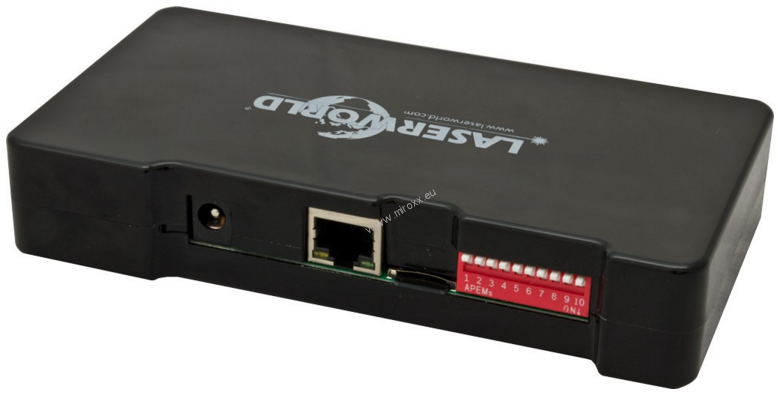 The Laserworld ShowNET LAN interface can be used in different ways and combinations:

As SLAVE interface to a Laserworld Showeditor 2015 Set

Especially fixed laser show installations often require an automated playback system. In many cases there is no possibility to install a computer control system. The Laserworld ShowNET interfaces come standard with a microSD card and the interfaces can read standard ILDA files (*.ild) - which can be exported from Laserworld Showeditor 2015 or any other laser software that supports ILDA file export.
When having saved the desired files to the microSD card, a simple dip switch setting sets the interface to auto play mode - and automatically starts with playing back the show files saved on the microSD card. There are also many preset figures already saved to the internal memory of the ShowNET interface, so these can be used for auto play as well.

As descirbed above, the Laserworld ShowNET can play back standard ILDA files from a microSD card. This playback feature does not only work in automatic mode, but also allows for individual DMX triggering of the very patterns. Further modifications to the figure, like e.g. intensity, base color, size, offset etc. can be controlled through standard DMX512 protocol, without having to save a specifically modified figure.
This DMX controlled laser playback system feature makes the ShowNET even suitable for larger scale live laser show productions, where the preset figures are often just triggered through a big, high professional lighting controller.

As ILDA IN - to - LAN - to - ILDA OUT adapter (ILDA range extender, ILDA over LAN, ILDA over Network) - two interfaces required per signal line

People that still use an older type USB DAC interface often face the problem of having to run long ILDA cables. However, the possible overall length of ILDA cables is limited due to the way the signal is transmitted. So some people use USB - to - LAN extenders to transmit the USB signal over longer distances. However, these solutions do not always work reliable - and especially if it comes to laser, it is important to not receive any irritating signals on the control line.
The Laserworld ShowNET interface is able to extend the ILDA signal from the ILDA output of any other ILDA outputting interface, e.g. a Pangolin Flashback 3 (FB-3), over any distance, by transforming it to a digital TCP/IP network signal. That way it is possible to use standard network switches and standard CAT cables for signal distribution. Even fiber cable transmission is possbile.
It is possible to use up to 16 interfaces for inputting the ILDA signal to the network and up to 16 interfaces for outputting it again. Each input interface gets an individual address (can be set with dip switches) and the receiving interface is set to the corresponding receiver address (see manual for details). Then all input interfaces can be connected to a network switch, all ouptput interfaces are connected to another network switch and those two switches are connected by one (!) network cable only. Of course, if only one signal line shall be extended, there is no need for any switches -  a direct LAN cable is sufficient.